Since 1998, Air Menuiserie has been repairing, manufacturing and restoring wood and wood/composite aircraft

Created in 1998, Air Menuiserie, located in Bernay in the heart of the Normandy region, specializes in repairing, restoring and manufacturing wood and wood/composite aircraft. Boasting EASA and DGAC agreements, we have over 40 years experience and expertise.

Since 2017, we have been a key-partner for AURA AERO, a digital and eco-efficient aircraft manufacturer, for the design and manufacturing of their first aircraft, INTEGRAL. This partnership aims at improving the continuity of our know-how in terms of wood-carbon aerostructures, through the training of young Companions. 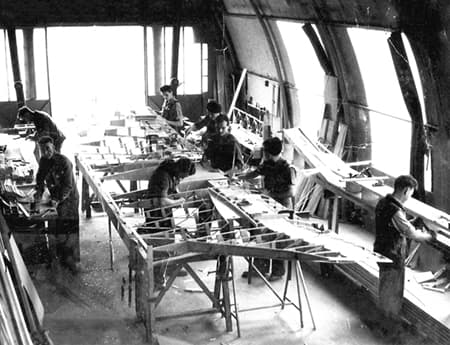 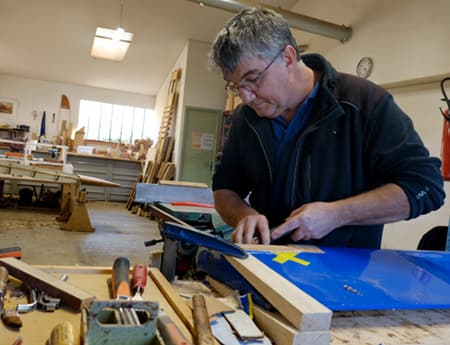 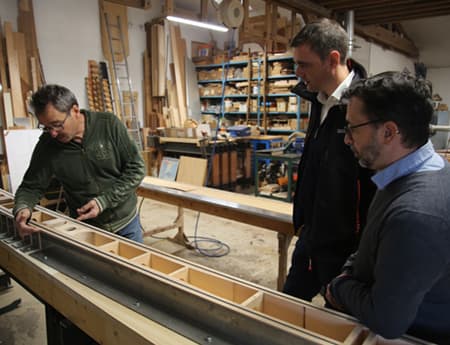 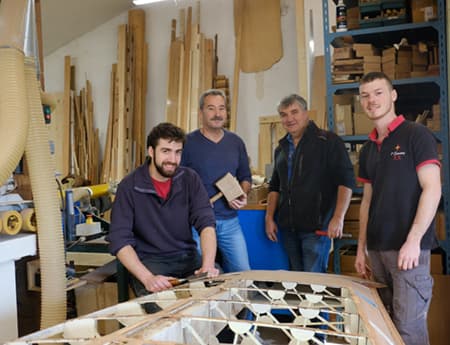 Air Menuiserie masters wood techniques, in particular finger-jointed assembly of boards or plywood, as well as the art of extracting a damaged part without risk for the elements around it.

All operations are carried out in compliance with the aeronautical material standards and regulations. The woods used are selected with regard to the requirements of aircraft manufacturers. The plywood used is “aeronautics certified”. The adhesives, prescribed by the manufacturers, are applied in our workshops, which are approved and heated so as to respect product recommendations. 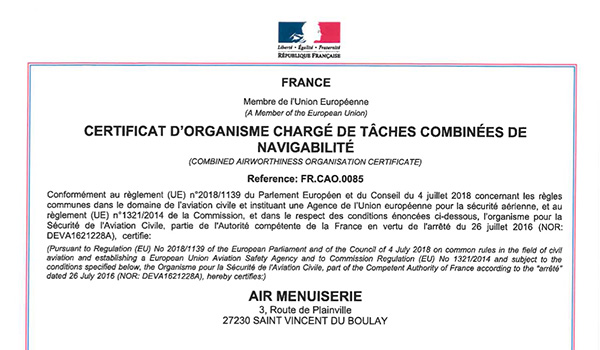 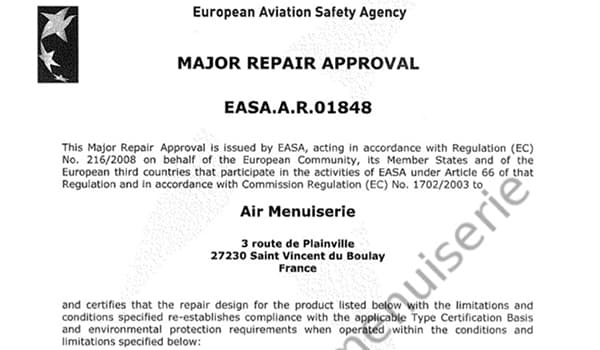 EASA.A.R.01848 - In 2008, we launched a wooden structure repair handbook, allowing repair operations on any wood and fabric or wood/composite aircraft. Details. 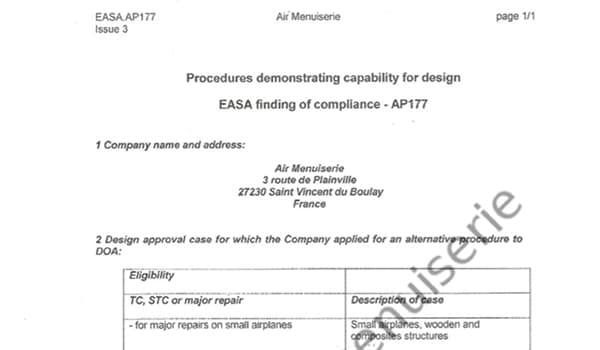 APDOA n°AP177 - In 2005, we obtained this agreement, enabling us to carry out major repair operations on wood and composite structures. In 2003, a 3rd issue of the handbook was approved. Details. 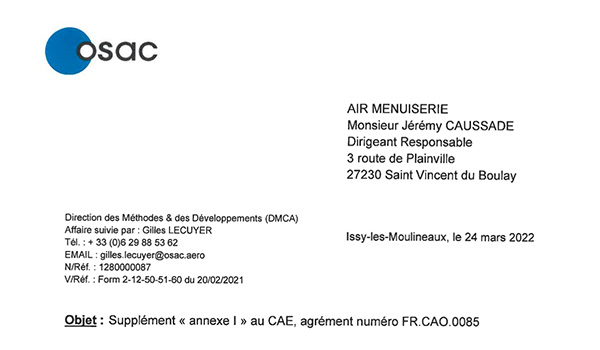 Supplement « annex 1 » to the CAE - In July 2015, we obtained the agreement allowing, in addition to the MOM, aircraft maintenance covered by Annex II to Regulation (CE) 216/2008.
In March 2022, the CAE Combined Airworthiness Organization Part-CAO manual supplement for aircraft maintenance Annex 1 was approved. Details. 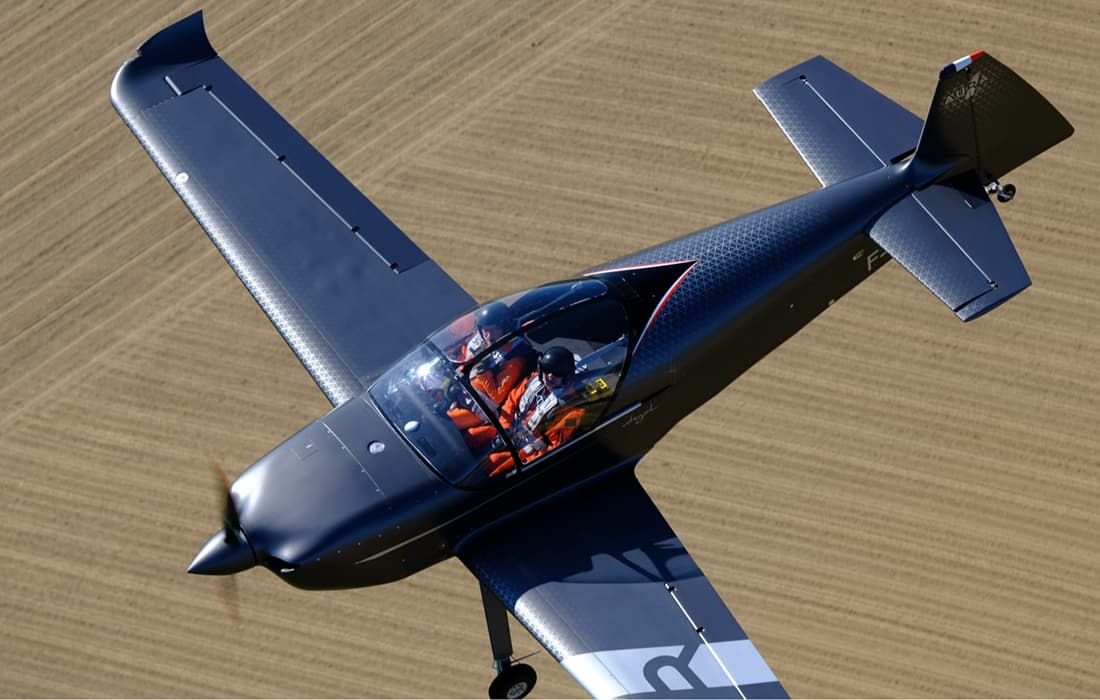 In our workshops, located in Saint-Vincent-du-Boulay, we build wooden structure aircraft on demand, based on plans supplied by our customers.

We repair wooden structure aircraft, under Standard Category Airworthiness. These repair operations are EASA approved and are included in the Air Menuiserie SRM. The materials we use, plywood and wood, respect supplied definitions. We are capable to qualify wood accordingly to French/European certifications.

Jean-Marie KLINKA, engineer and former head of the Mudry & Cie Aircraft Design Office, investigated the option of a reinforcement of the main spar, by placing a one-way carbon sole on the upper and lower faces of the wing. Each one was inspected by ultra-sounds in order to be used in the frame of the "GM200 wing spar repair".

With the help of the “Dassault Voltige” flying club and Jean-Marie SAGET, former test pilot at Dassault, the project began. Static tests, carried out in 2013, demonstrated the quality of the repair with rupture now at over 12g. This repair, know as BK, is developed, approved and implemented only by Air Menuiserie.

The Air Menuiserie team is at your disposal